The Art of Pipeline Recovery

In this era of high commodity prices, I believe that more pipelines should be recycled, rehabilitated and reused. A new 16" pipe purchased today would cost upwards of $35 to $40 per foot - not including the cost for coating and transportation. There are so many practical uses for recycled tubes. The pipe can be relaid as pipeline, installed as road boring or road casing, pile driven in many piling applications, used down hole for rat hole or mouse hole connection pipe in drilling operations, as well as many other structural applications.

I have taken up literally hundreds of thousands of feet of pipe on their third recycling leg, including pipe that was laid Oklahoma in the boom of the 1920s and excavated and relaid in West Texas in the 1930s. At this writing, we are removing this same pipe 60 years later to be used as slurry line in a copper mine in Mexico, water line in Vietnam, and structural piling in New England.

The pipeline company decided to lay the new line in the same ditch as the old line we were removing. Prior to signing off on the purchase, we surveyed the old sixteen-inch, seven-mile segment to determine whether the pipe was suitable for recovery and reuse for structural or other applications. A positive assessment was made, and we made provisions to obtain ownership of the line. In this case, our company already owned the pipeline, and the pipeline company maintained ownership of the right of way as they were to replace the old line with a new one. They decided to retain a right of way service company to deal with landowner relations before and during the excavation process.

Preparing for the Excavation 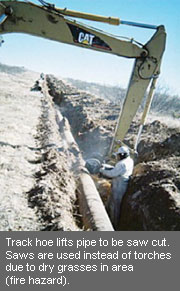 A land surveying company was asked to resurvey the pipeline, as it had not been mapped in many years, and all parties wanted to determine what other circumstances might have altered the existing right of way over the past 20 years. Realizing that no system is perfect, it was no surprise when we discovered that some lines were missed in the survey. In addition, the flow lines that crossed the pipeline were made of fiberglass and could not be determined or found with any conventional survey tools.

Flow lines are not usually mapped, and in this case, they were active and gathered crude oil from the many wells in the area and transported it to central storage tanks. Since these lines take crude oil from a well to a gathering spot, such as another pipeline for gathering or a field tank storage system, there were ample opportunities for the release of product. As a result, great care and caution was essential.

In another part of the survey, we removed a sample of the pipeline coating and sent it to be tested for asbestos. Guidelines and regulations require staged or random samples along the pipeline as procedures and materials might have changed during the lay or maintenance process. Two samples were taken at different parts of the pipeline approximately three miles apart. The lab report in both cases affirmed a 25% asbestos content in the coating, which was embedded in a felt and tar (or coal tar type)material. The coating was not considered "friable" or free floating while embedded in the tar and felt material. Federal guidelines are interpreted differently in various locales. For example, in California the coating on a joint of pipe loaded on a truck with asbestos-containing materials is considered a product. If it is removed by a mechanical means, then it becomes an independent material and a candidate for being friable.

We retain a full-time Texas-certified consultant to oversee the operation in order to comply with state and federal guidelines regarding proper disposal of asbestos in the coating material as well as to ensure the safety of the personnel employed on the project. Their job is to determine when, and if, the asbestos containing material on the pipelines or coating is potentially friable and, if so, to determine which procedure is necessary to contain it and prevent any problems from happening. In the case of this particular recovery, Joe Prevost was in charge of environmental oversight. As a certified contract supervisor in the state of Texas and a graduate of NATEC of Texas, Inc. training school for asbestos abatement, he is considered an expert in the area of pipeline asbestos coating abatement.

A construction company was retained to provide roll-off or portable container units to help contain any coating material that might fall off during the removal process. Since the material does not bond well with the pipe, it is normal to expect a certain amount to fall during the process. In addition, the company provided other transportation units to haul the pipe from the excavation site on the right of way to the staging area nearby. The transportation vehicles and trailers used were designed specifically to minimize the distribution of waste material along the right of way and to minimize clean up procedures by hand. We determined that this was the most efficient method for controlling and containing the material.

It was determined that pipe with asbestos-containing material on the coating should remain on the right of way in order to maintain better control of falling material. As a result, we took precautionary methods and removed the coating before the pipe was transported on public highways. Recognizing that we needed to remove all this material before it could be moved to another location, arrangements were made to dispose of the coating material in a local landfill which agreed to take the material with proper documentation. 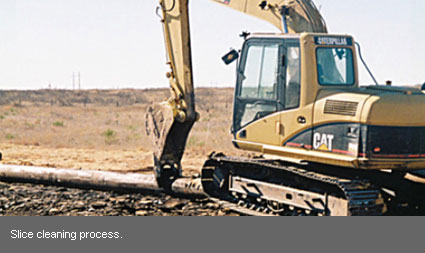 The process of rehabilitating this pipe began when the pipe was excavated and loaded on a special trailer and transported down the right of way to the staging (cleaning) area. Each day, the coating was removed from the right of way areas where it had fallen off during transportation and throughout the staging process. At the staging area, the pipe was slice cleaned by removing the coating material with a special tool attached to the excavation equipment. Then the asbestos-containing material was loaded into a lined rolloff container, dampened to keep it from becoming friable, and placed under a tarp to contain the material as it was removed. As an added safety precaution, personnel used respiratory masks at all times. When the roll-off container was filled, a special truck transported the material to the landfill.

Our certified asbestos abatement supervisor followed the truck transporting the material to the landfill and observed the roll-off being weighed, unloaded, and prepped for burial in the landfill. The truck and empty container were then weighed again and documents completed so that a history and paper trail existed on the manifest signed by the landfill authority, the asbestos supervisor/inspector, and the driver of the truck who was employed by a local construction company familiar with our abatement procedures.

After the excavation crews finished their work, it was important to take care of the staging area where the pipe had been sorted, cleaned, and loaded prior to shipping to market. While the crews cleaned the residue from the coating on a daily basis, there was additional work to remove any soil surface area that might contain any residue or coating. A minimum of two inches of surface topsoil was accumulated throughout the cleaning area and removed to the landfill.

This project took about 45 days to complete due to the congestion of multiple fl ow lines and the delays caused by other pipelines transporting substances across the right of way route. There were a large number of these lines crossing our right of way. Those pipelines belonged to other pipeline and production companies who demonstrated extreme caution during the transportation process. This is often the case, as companies involved with moving pipelines want to ensure their line is not cut during the process, as this could easily cause a spill or release.

In addition, many of the lines were not marked in any way and extensive use of line finders and surveys were employed to map the pipeline so as to prevent any mishaps or damaged pipelines whether active or abandoned.

The overall cost of the project including excavation, cutting of the pipe, removing it from the ditch, hauling it to the staging area, removing the coating, hauling the residue to the approved landfill, paying landfill fees, and then loading pipe on trucks for market and final clean up of the staging site and right of way cost about $6 to $8 per foot for work on the job portion only. This was only a seven-mile pipeline, and I know that longer lines would be more economical. A 40 or 50 mile or longer line would be much more economical on a per foot basis due to mobilization costs and economies of scale.

It should be noted that the real issue lies in the recycling of out-of-use pipelines. When it comes down to things, we are talking about steel in a tubular form. In this case, the pipe that been servicing crude oil for the past 50 years was in excellent condition!

The bottom line is that most companies do not want to bother with out of use, idled or abandoned pipelines. They are considered potential environmental problems with unknown or imagined consequences for anyone tampering with them. Most business development managers have higher yielding priorities than disposing of out-of-use pipelines, so from a financial standpoint, it's no wonder that the disposal task gets bumped. Still, other companies feel they are warehousing right of way easements if they leave a pipeline idled, but on an abandoned status as far as regulatory or taxing authorities are concerned. As regulatory agencies continue their discussions on disallowing "in place" abandonment of pipelines without individual landowner permission, we can expect to see some important changes in the very near term.