Pipeline recycling began in the nineteen twenties when flush production as it was called then prevailed and there was virtually no technology for secondary production in existence.

Flush production was and is initial production from an oil well generally that has a stronger gas or water drive in the first opening than later. In the early history of the oil industry, new fields were being found in Oklahoma, Arkansas, and Texas on a frequent basis and the "boom" went from place to place; Ranger, Burkburnett, East Texas, etc. When the initial or flush production declined, the old fields were left for the new ones. In some cases, especially in sizes of 8” diameter and larger, the pipelines were removed and taken along to the new production. This happened much more in the late nineteen thirties and nineteen forties when much of American steel production was going into the effort of World War II.

Much of the pipe used for pipeline was of a butt weld or lap weld configuration. The tubes were well constructed and it takes a trained eye to see the seam in the pipe where it came together. I almost have to see a cut off that was sawed off in order to see the seam where the two sides came together. The yield or burst pressure was and is not more than 30,000 psi on the pipe steel used at this time. Most of the pipe constructed was in single random lengths of 18-21 feet length. (The exception was some German Mannesman manufactured pipe that was of seamless construction and finished in double random lengths of 38-42 feet. The yield of 30,000 psi was the same as the lap weld or butt weld type material made of the same softer steel. The 30,000 psi yield is in contrast to some electric resisted weld (ERW) type pipe in more common use today that has a yield of 42,000 psi or also abbreviated to X-42.)

When the fields played out or the flush production declined significantly and the pipelines were removed, they were taken out in double random lengths with a mid weld or mid collar depending how the connections were made in the initial laying. This was done for transportation purposes as pipe trailers were of forty foot lengths and forty foot pipe was the most economical way to transport. When the mid weld or mid collar was left in, it decreased the number of welds needed at the new location that had to be made to connect the new pipeline. I have encountered thousands and thousands of feet of pipe that was "relay" pipe. As I write this article, Pipeline Equities has crews digging in West Texas pipe exactly like this with a weld every twenty feet. The pipe is at least eighty years old and looks as good as it did when it was laid and test as good as it was when it rolled out of the mill. 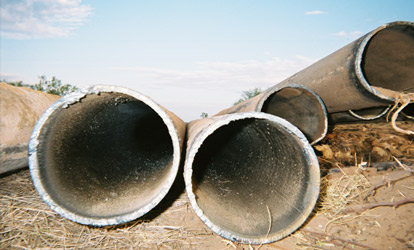 Samples of 8 5/8" outside diameter line pipe excavated in West Texas by Pipeline Equities. The pipe is .322 wall thickness and weighs 28.55 pounds per foot.

The same 8 5/8" pipe cut to show the mid weld where the pipe was connected either initially or on a relay. Interior shown below. 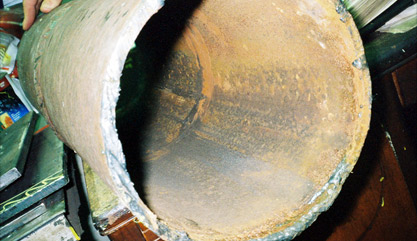 So the idea of recycling idled or out of use pipelines is not new. Pipeline Equities has been doing this for twenty-five years and Humble Pipeline or Exxon has been doing it for eighty years at least. This meant that John D. Rockefeller was the first "put your money where your mouth is" environmentalist in the oil industry and possibly in the United States.

We find many uses for this tubular form of steel in other applications. We use these abandoned pipelines for conduit for water lines, cable, sewage disposal, irrigation projects, conversion to gas service and much more. On removal, reconstruction of anything you imagine that can be made from tubular steel. The pictures above indicate the condition pipe can after long periods and proper care in maintenance and removal. Pipeline Equities understands this process.